Retrieved  What We Can Learn from Sexual Response Cycles

Rosemary Basson’s Non-Linear Model of sexual response incorporates the need for intimacy, acknowledges that desire can be responsive (to someone or something else) or spontaneous and may come either before or after arousal. It recognizes that orgasms may contribute to satisfaction but aren’t necessary for satisfaction, and considers relationship factors that may impact the cycle of sexual response as costs or rewards.

The inability to really define “normal” is one of my favourite aspects of Basson’s model. Women and men can experience sexual response in a variety of ways. Parts of the model are linear (e.g., arousal and stimulation occur prior to the experience of satisfaction), but other parts are circular and bidirectional (e.g., sexual desire may come before or after arousal and the two may feed into each other).

There are three messages we can learn from studying sexual response cycles:

Try not to focus on “normal”. Instead, shift that focus to you and your partner’s sexual response and communicate your needs both inside and outside the bedroom. 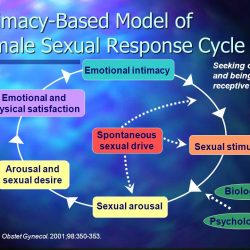 She constructed a new model of female sexual response that incorporates the importance of emotional intimacy, sexual stimuli, and relationship satisfaction (see figure above). This model acknowledges that female sexual functioning proceeds in a more complex and circuitous manner than male sexual functioning and that female functioning is dramatically and significantly affected by numerous psychological & social issues (e.g., satisfaction with the relationship, self-image, and previous negative sexual experiences).

According to Basson, women have many reasons for engaging in sexual activity other than sexual hunger or drive, as the traditional male model suggests. Although many women may experience spontaneous desire and interest while in the throes of a new sexual relationship or after a long separation from a partner, most women in long-term relationships do not frequently think of sex or experience spontaneous hunger for sexual activity.

Women’s desire, especially after the first 6-12 months in a relationship, tends to be responsive rather than spontaneous, say sex therapist Barry McCarthy & sex educator Emily Nagoski. There is nothing wrong if you have responsive sexual desire. Responsive desire means that you don’t have spontaneous desire when you’re going about your day, but once you start to interact with your partner, your desire comes as a response this interaction.

You only need to be willing to enter into a connection, even if you feel no desire. This of course depends on feeling that your relationship is satisfying & secure. Without a “good enough” relationship, you probably won’t be willing to enter into any sexual encounter. The essence of healthy sexuality is giving & receiving pleasure-oriented touch, says barry McCarthy. It’s important to understand that there are five gears (types) of touch, just like there are five gears in your car. You can enter into a connection with your partner even when your desire is neutral or zero.